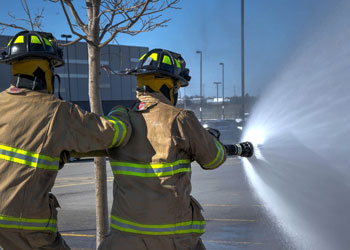 Safety inspections have fallen by 40%, leaving thousands of people at risk. It should be a source of deep shame for this government

“What value do we place on the lives of our citizens,” asked Sam Stein QC at the Grenfell Tower inquiry last week, “and how far are we prepared to pay for the protection of our people?” This question, it was suggested, lies at the heart of the investigation into the failures that led to the deaths of 72 people.

Eighteen months on, there are serious questions about the government’s commitment to fire safety. Yesterday the fire and rescue inspectorate (HMICFRS) published the first tranche of studies into the effectiveness of services across England. This is the first time such an inspection has been carried out. It found that the 14 fire and rescue services inspected so far had cut their fire safety audits by 42% since 2010-11. Eight services “require improvement” in terms of fire safety audits, while one service was found to be “inadequate”. Many teams are understaffed and under resourced.

“Protection work” – visits by fire services to homes and buildings to assess fire safety – was found to be “not a priority”. The findings suggest that Grenfell was not an isolated case when it comes to fire prevention. The inspectorate has not yet looked at London, or other metropolitan areas, but there are very worrying echoes here of what we’ve learned about the policies and procedures that led up to Grenfell – and the institutional defensiveness we’ve seen at the inquiry so far.

A lack of resources means that fire prevention teams are unable to get around all the premises they need to inspect and cannot keep up with requests for inspections from planning departments.

This builds a worrying picture of a service that is responsive rather than proactive, prioritising emergencies over inspections.

Back to News Articles